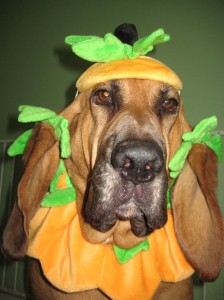 Warning, if you are not a Bloodhound person DO NOT read this blog post. But if you are a hound person, read on! This post is all about ears.

My Frankie is a prolific digger of holes.  She loves digging. A hole to China?  Give her an afternoon. I only wish I could harness that energy and direct it, maybe have her trench a line to lay cable or something.  Alas, instead I find myself constantly leveling those holes so I don’t trip and injure myself.

But here’s the thing, there is NEVER enough dirt refill them!  Where does that dirt go?

Specifically, her earth-caked right inner ear (though the left one gets filthy, too).

First official HOUND DOG EAR question: Why is her right ear ten times dirtier  than the left?  Does your Bloodhound have one “dirtier” ear?

Which brings me to my NEXT ear query… starting with eye goobers.

You know the eye goobers.  Icky slicks of “sleepers” seeping down her snout.  They’re not anything to be alarmed over, and I try to keep tissues handy at all times to gently wipe them away, BUT occasionally no tissues, shirt sleeve or napkin is available and I improvise. Specifically, I’ll take the ends of Frankie’s long, lovely, dangly Bloodhound ears and wipe away the eye goober.

Yes, I’m a little grossed out by my actions, but I’d like to know if any other Bloodhound owners improvise in the absence of a tissue.

Finally, when your Bloodhound is sleeping, do you sometimes tip toe over and flip back her ear for better air circulation in there?

I do! Is this normal?

Happy Trails to everyone!

When not cleaning out her Bloodhound’s ears, Jamie Brazil makes attempts at a writing career.  She is the author of A Fart in Time, The Commodore’s Daughter, and Prince Charming, Inc.  She is also listed as a translator on “Wisdom of the Buddhist Bloodhound.”