Skip to the content
ONI THE LONELY
Mari Kato, 16, wants what everyone else her age wants: a driver’s license. 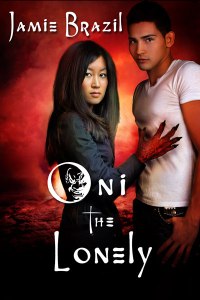 Too bad a family curse, passed on by her Japanese-born Buddhist dad, who claims to be thousands of years old, transforms Mari into a flesh-eating Oni demon when she feels frustrated (like every time she gets behind the wheel). But when her geologist mom moves their vegan-lifestyle-obsessed family to Rock Creek, Mari stumbles upon the gates of Hell and a mining company plundering its depths. Add in an evil cheerleader determined to steal Mari’s first boyfriend and plunge the Earth into eternal darkness. Suddenly getting the keys to the car isn’t as important as saving the world. Totally dealable… if she can find the courage to reveal her demon self.
BUY: Amazon

“A thrilling tale.”  ~ Internally and Eternally Linked Reviews  –
“Ms. Brazil’s attention to historical detail, as well as Japanese customs and traditions, made this novel a delight to read.” – Blue Rose Romance
In 1853, fifteen-year-old Jennifer Perry dreams of traveling the world, a dream that will never happen now that she’s promised to a man twice her age. But what can she do? Run away. To Japan, where her survival is uncertain. Learning the ways of her new world, and the code of the Samurai, she uncovers a plot to ambush the American sailors. Now she must risk in her own life in order to save her Commodore father.
BUY: Amazon

“This is a funny story. With Toby being a science nerd, it mixes some scientific facts along with the story. Captain Bart is a very colorful, smelly fellow. Toby and Riley try to make their way home many times, but they never know where they’ll end up. The story had me wondering if it was all a dream or an awesome adventure!”

Some writers STILL deserve to starve. Updated and revised, the popular Some Writers Deserve to Starve! 31 Brutal Truths About the Publishing Industry is back for round two of

humorous advice for writers just getting started, and hilarious cautionary tales for those contemplating risky (and risque) career moves.

“If you seek success as a writer, save yourself some time, trouble (and maybe a few bucks) by buying Some Writers Deserve to Starve.” ~ Donald Maass, noted agent and author of Writing the Breakout Novel